Planning the plan to reach a masterplan. Or how to fail miserably.

We already wrote about our lengthy planning process before. It took us a year now to carve out the route, book flights, get all the gear ready and mentally prepare us for the upcoming trip. A few reasons that don’t ease the entire process are, well, at first beer. Beer might make ideas more creative but not necessarily convertible.

Secondly it´s not easy to find sensible and doable routes from 10.000 kilometres away. Our planning failed due to reliable maps and the lack of similar travel reports in the regions.

Adding to that, there are plenty of climatic barriers to reconsider. For example: the Kamchatka peninsula, is a dream for winter sports athletes but turns into a mosquito ridden swamp during summer, with not many roads to cycle on. The reason? Well, permafrost soil prevents rainwater from draining from the surface.

Our visit to the Russian peninsula is so far not cancelled, merely postponed. But what now?

The interwebs knew it all. Luckily everywhere you go, some crazy person has been there before and  we found a decent amount of travel reports on Yakutia. In this case by a guy called Richard Löwenherz – catchy name ha? Sounds like a knight in shiny armour.

And the Kolyma highway even got international attention as Ewan McGregor, aka Obi Wan Kenobi rode the dangerous stretch between Yakutsk and Magadan on a motorbike. There is a super funny documentary on Youtube, go check it out. Of course I´d manage the entire thing if I had Yedi powers. But draft dodgers like Roman and myself would get some serious damage done if we got hands on laser weapons.

Nonetheless, there it was, our dream come true: “The road of bones”.

Bikerafting in Yakutia – so many miles.

At the end of 2017 our preferred route consisted of cycling 1300 km along the road of bones, then pushing the bike cross country for 200 km, before traversing a lake of 20km, climbing a mountain pass after 150km and sliding down a 500 km long river to the sea of Ochotsk. A master plan. But there is always someone throwing sticks into your wheel.

At the beginning of 2018 our flight back from Ochotsk got cancelled, forever. Now Ochotsk, a cosy little gold mining village by the sea, is only accessible by boat or by shabby plane from even further away Charbarowsk. We never got a statement by the airline, as to why the flight route was scraped. So it seems Ochotsk isn’t a new bathing Mekka for rich Russians. The new Ibiza – I guess not. Our plan? Off into the bin again. So we replanned everything and have now reached plan E or F.

By now, our most recent route sounds a little like this:

1000km cycling on the road of bones towards the east, 200km southwards to a goldmine, pushing the bike another 100km over a mountain pass before reaching a river that will take us back 400 km in the direction of the Aldan river. When we reach that, we’ll cycle another 400km back to Yakutsk. So the rough plan. Check it on the map.

Green – Road of Bones in summer

Orange – Road of Bones in winter

Romans rusty steed – and how to solve a few problems.

The route issue was settled but organisations weren’t over for sure. During the entire process we somehow decided that a combination of our bikes with boats would be exciting. A logistical nightmare but a great way to be able to travel entirely different routes. Sure, we couldn’t use kayaks or canoes, neither the standard supermarket rubber boats. Large white water rafts were also too big and heavy, so not many possibilities remained.

For a while now, so called packrafts, have been a thing in America. Small, light, somewhat white water suitable boats, that aren’t as sturdy and dynamic as proper kayaks, but totally fill the gap. I know, as real country men we would chop down some trees and build floats but we don’t have enough time. Packrafts are our means to travel these beautiful remote corners in Yakutia.

For travelling on land, we had similar troubles. Romans bike had suffered some fatal blows in Tajikistan and needed repair. And lots of it. He, back then, even got a prize for winning our puncture challenge. Not only due to his lack of puncture repair competence, but also because his tires were not made for that kind of rugged pavement. The noble steed had started to rust and slowly turned into an old donkey. We decided to start a search for a new pony. 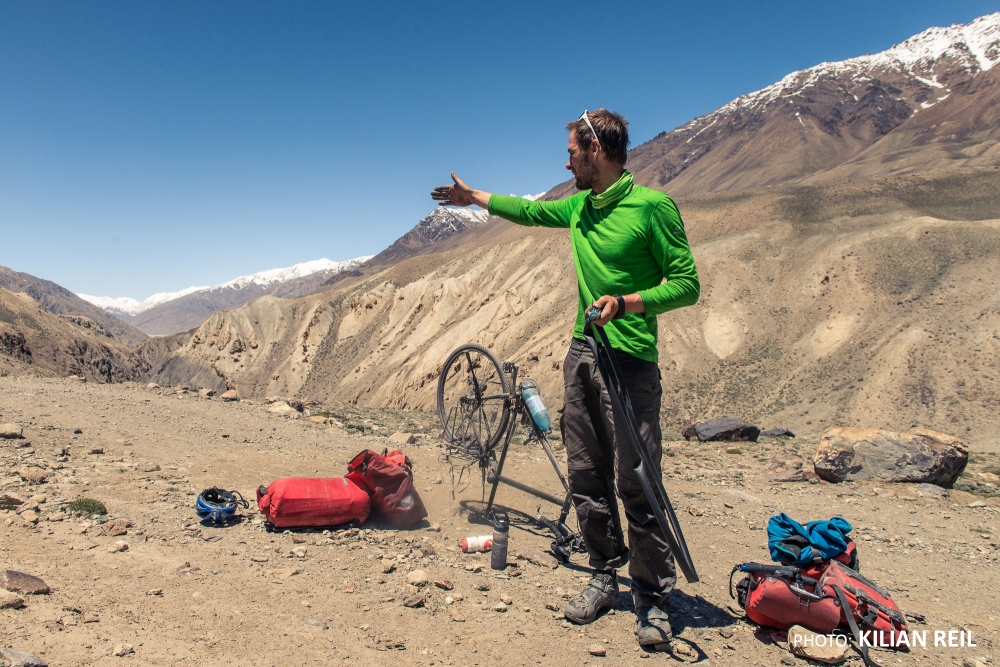 Luckily I stumbled on a sponsoring programme by the Germany bike forge ToutTerrain to which I secretly applied. As again, our “fortune favors the fools” strategy worked well and here we are, holding two new noble horses. Let’s see, if we can further withstand the pressure. At least from a technical point of view, chances of failure should decrease. More details on bikes and boats in the next episode.